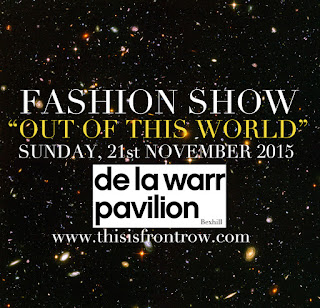 (by Kim Batty)
Catapulted through the megasphere and bursting through seven light years of existence, FRONT ROW takes us back to the future and Out of This World, hurtling through dimensions of fashion, unnervingly alien but totally real.
Straight down the runway and with undeniable finesse, our probe-less hosts, Doon Mackichan and Maria McErlane, who have been making us laugh since the dawn of time itself and then, for the next three humanoid hours, a little absolutely fabulous but mostly fabulous. 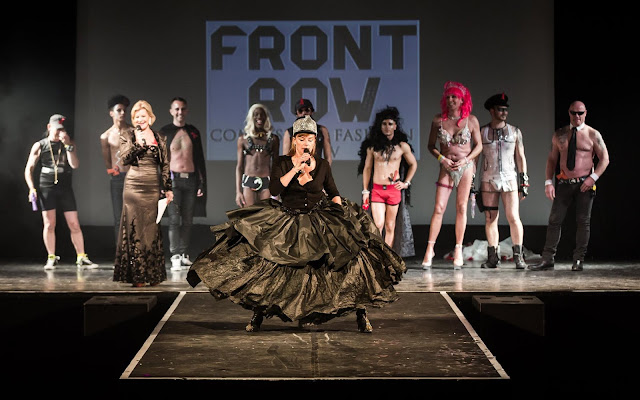 Whilst being entertained, a two piece electronica band are beamed down, Sister Gracie. So in-sync is their performance, one could wonder whether they were once one and now, a product of some industrial fission, splitting them into two elite performers. I wanted to waggle my five arms and nod my two heads, I won’t tell you about the rest. 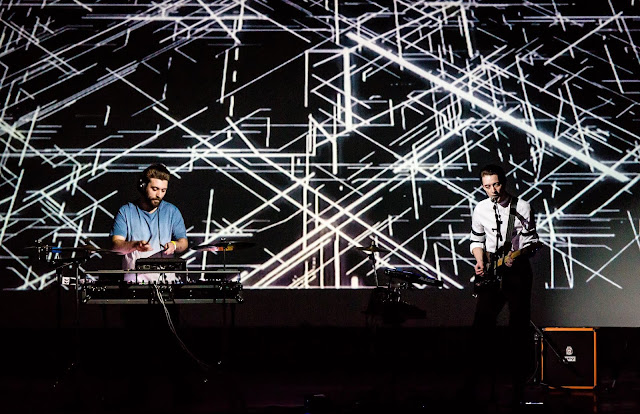 Francis Fifi’s headwear opens the fashion show. Modernist clean lines and rounded corners, Darth tribal and with murmurations of ancient Eastern head gear but sparkling with futuristic spangle, they reflect the ideas of the future, from the past. Bevali & Isabella Francis, a mother and daughter combo of deadly Power Ranger designers, don’t mess. 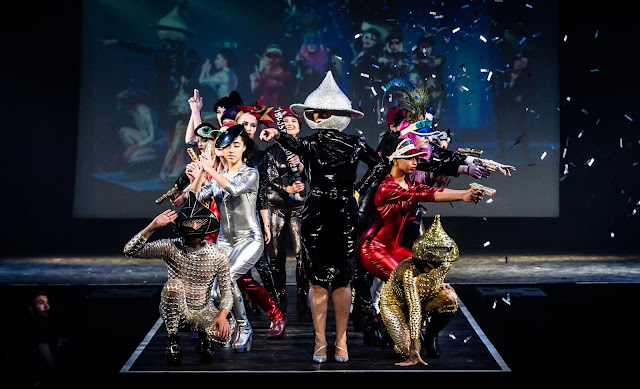 Bexhill College take a piece of other worldliness from the escapisms of storytelling and the supernatural. A Maleficent horned female shares the stage with an owl like feathered creation and a fawn with a magnificent train. Mashing and mixing with space age, a white, feathered mini and origami interstellar cloak.

Intergalactic, pink, PVC barbies infiltrate the catwalk from FdA Fashion, Brighton University, scarily plastic, even scarier that they are real. Chunky-monkey, very wearable, over-sized, black, Talking Heads, tops with black knee-pads, bring us almost back to earth. But only almost, before scooping us up and putting us on the ghost train with some cloth woven sceptres. 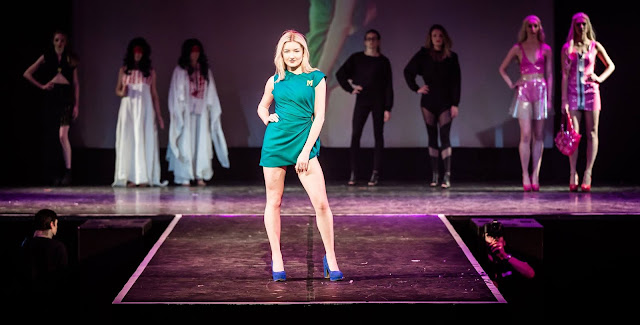 Dreambolic designers Sam Lewis and Stephanie Hills mess with our tiny human minds by bringing down the borders and fusing the post-war Charleston, flapper dapper with Arabian Nights' silks. And why the devil not, from Zeppelin to magic carpet, in beautifully crafted satin slacks, a particular shooting star for me. 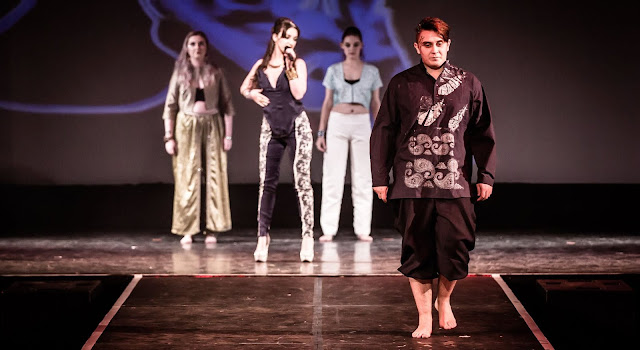 And so this brings us to the Charity Shop Challenge 2015 Awards' super-trooping, funny mongering, talented, old you lot. So supersonically high was the standard, I almost went into orbit. A lady in a sparkling catsuit and an enormous global paper lampshade on her head filled with lights funks up the jam, so Seventies cyber and crazy. I would give up my hover board and cruise to the moon for a disco ball-style afro.

All the entries were prize-worthy, the audience erupted with applause, laughter, shouting, banging their handbags and anything they could find to make some noise of appreciation.

But we cannot skip past the "Supreme Being of Creative Excellence" Award winning entry, Peter Quinnell’s amazatronic splendorama. Dressed in silver thigh length boots, a silver angled moon raking skirt and pronged bra, with a fish bowl helmet and spatula antennae, she looked out of her silver masked head with anticipation and an air of disgruntled frustration, that she had been removed from her planet and forced into the De La Warr. Described by one audience member as “ Betty Crocker meets Barbarella” you had to give her the prize, not only because of its brilliance, but because she would have zapped you with her stingray and thrown you in a black hole, if you didn’t. 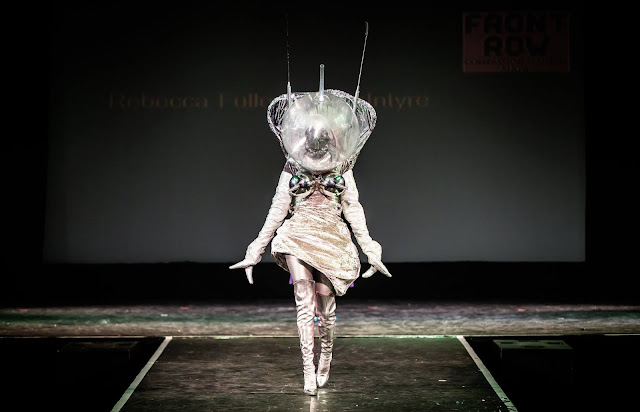 Descending on us like a moon landing, the Terence Higgins Trust volunteers took us into planet campalicious, a planet that promotes less is more: less clothes, more fun. A plethora of beautiful bodies expelling dark forces from the nooks of the galaxy promoting one eternal vision of freedom and expression. 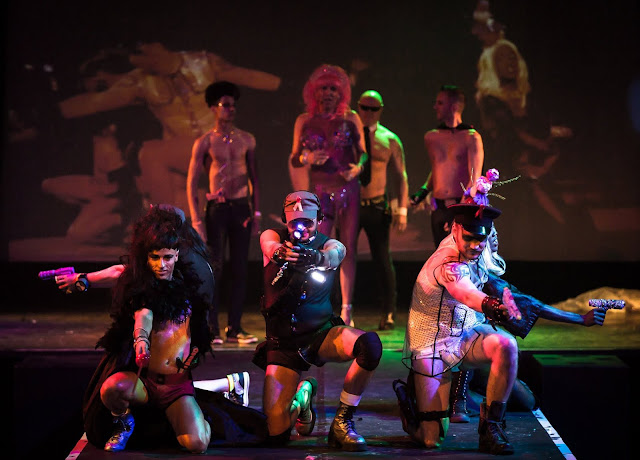 After we had all wet our whistles, Rye Studio School students gave us space street wear. (That’s if some of you like a fluorescent bird’s nest collar) Sharp and current, sweat suits with iridescent triangles and large foiled hoods, spiky black shorts and a ruffle collar all had the air of cool.
Even the wedding dress, adorned with multiple straps, was cool.

And then in from the dark, Caragh Jane Logan's eponymous Karma Gedden label appeared, rainbow light up trainers, fibre optic headwear, glo body paint, somewhere in the multiverse a free party was missing its ravers. Luckily, they had landed on Bexhill Galactica and danced their wares away. 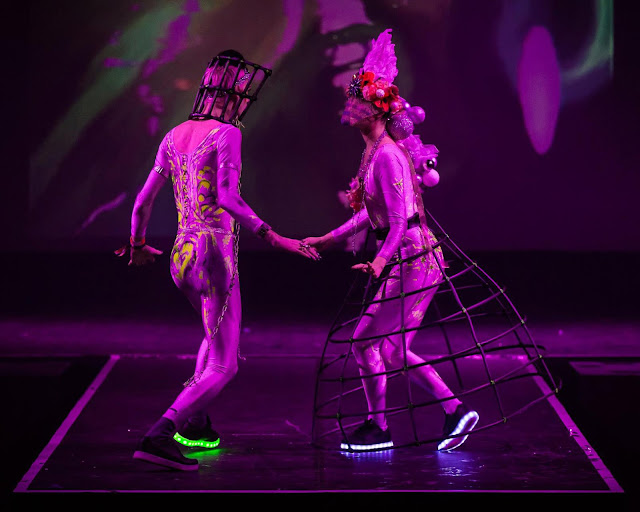 Colonising the stage like alien micro-organisms, Hastings Contemporary Dance School were exploring the space as if it was a lost planet, behaving separately, reacting collectively, creeping and bending, along the run way. They looked scared and alien and moved in a cross between gymnastics and dance. Other than an outpouring of talent and skill, it was a highly emotional performance and was nothing less than superb. 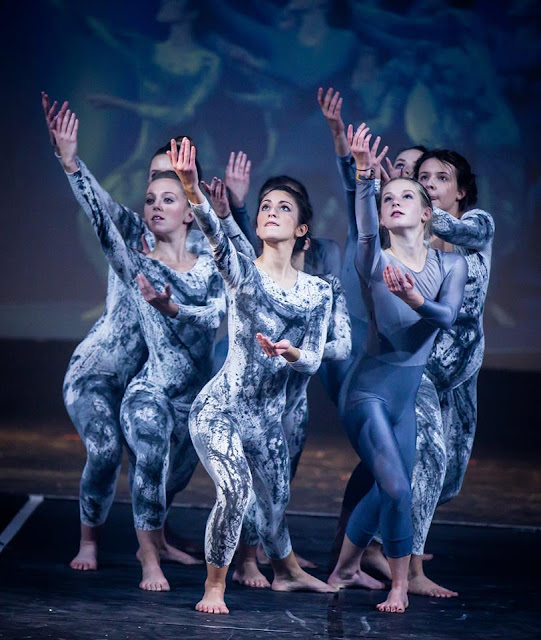 So now, Freya von Bulow, self described as “good with scissors”, that has to be an understatement of seismic proportions. Paper Couture that is haute couture. The volume of the dresses, built up by layers of paper and netting, is phenomenal. Each dress, all in white, contained finite cutting and shredding, producing binary, ghostly brides, beautiful and frightening.

Bringing us back down to Earth, only to be shot straight back out of our human canons into the stratosphere, Sigue Sigue Sputnik, ramp up the energy, in a collection of sassy leopard prints, tartan suits and straps and zips and some more zips, not forgetting some bad ass PVC and a gothic ruffle. The Sputnik was thrown into orbit and ended the show with a bang, bang, bang. Bravo. 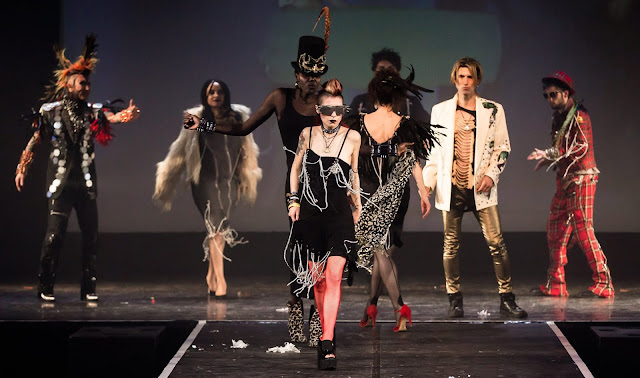 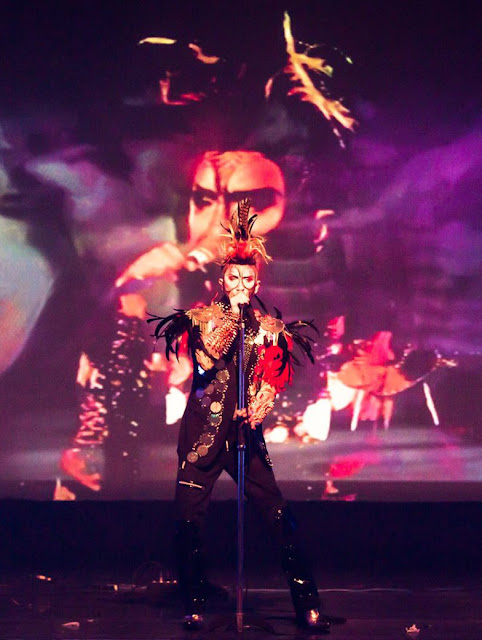 (all photos by Malcolm Tam)